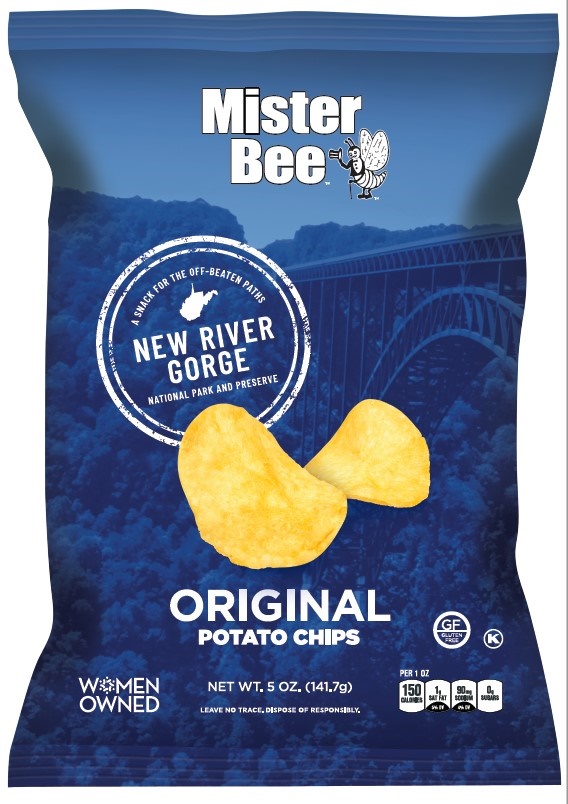 Mary Anne Ketelsen, president of Mister Bee, said the new chip bags will be available soon in local retail outlets throughout southern West Virginia and the Mountain State. “We loved all of the positive energy and enthusiasm for Bridge Day,” said Ketelsen. She said 876 one-ounce bags of Mister Bee chips (representing the height of the bridge in feet above the scenic New River) were handed out free.

Belcher said, “Judy and I were made aware of Mister Bee’s interest in growing their market reach in our region, so, to help achieve their goal. we proposed a new chip bag that would celebrate the state’s only potato chip company as well as the new national park and emergence of the New River Gorge region.”

“The work of NRGRDA and WV Hive show how the entrepreneurial ecosystem we have built in southern West Virginia can add value to long-standing businesses as well as new start-ups and early-stage businesses seeking to grow or pivot,” said Moore.

About Mister Bee Potato Chips: Mister Bee Potato Chip Company was founded in 1951 by Leo and Sara Klein and had its first offices on Mary Street in Parkersburg, West Virginia. At that time, the chips would be made in the morning and then Mr. Klein would distribute the fresh product in the afternoon. In November 1962, the company was moved to West Virginia Avenue, where the chips are still made today. Leo Klein operated the business until 1979, when he passed away at the age of 73. The company remained with the Klein family until incurring financial difficulties in 2010. Mister Bee now operates as West Virginia Potato Chip Company and was purchased in 2015 by new owners Mary Anne (Welch) Ketelsen, Douglas Ketelsen, James Richard Barton, Gregory Barton and Gregory Reed, along with Mary Maxine Welch participating in financing. Website: https://misterbee.com/

About New River Gorge Regional Development Authority: The New River Gorge Regional Development Authority’s (NRGRDA) mission is to initiate, facilitate and support the economic and community development efforts within the counties of Fayette, Nicholas, Raleigh, and Summers located in this region of southern West Virginia. NRGRDA stimulates the regional economy through business expansion and retention efforts, including an extensive portfolio of financial services; the management of sites for new companies locating to our region; and serving as a point of access for local service providers which offer a variety of technical assistance for business owners.

The West Virginia Hive is the entrepreneurship program of the NRGRDA and the administrator of the Country Roads Angel Network (CRAN). More can be found at https://wvhive.com